Many in the immediate area will be aware that there has been considerable anti social behaviour associated with this house over the last 3 years. The house was occupied by squatters. The Landlord left the country/jurisdiction a number of years ago for Canada where he has since set up a new life and was eventually declared bankrupt in Ireland. It was a very difficult situation as the PRTB had no jurisdiction, the powers of the Authorities were severely limited and court orders had failed.

A number of home owners, landlords and residents, stepped up to do significant work under the Eagle Valley Residents & Home Owners Association to resolve the issue over the last number of years. They worked with Cork County Council, local politicians, the Gardai in documenting the issues and engaged with the Bank and the Receiver. Their efforts culminated in the Bank and Receiver reaching an agreement with the squatters to leave a couple of weeks ago. The Receiver put up the metal sheets to stop any attempt by squatters to regain access. They expect to put the house on the market in the next few weeks and things should revert to a more normal appearance.

This issue shows the importance of having a Residents & Home Owners Association and how its work is reliant on the volunteer efforts of each resident an homeowner. Congratulations to those volunteer homeowners and residents for their generous and persistent effort on behalf of our community 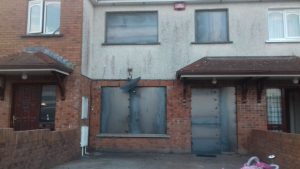